Get me outta here!

Fern leaves called Pecopteris grew abundantly in the coal swamps of the Carboniferous Period. These leaves dropped off of a 35 foot fern tree  called “Psaronius“, one of the most common Paleozoic types. With its sparse and expansive branches, it resembled the modern day palm tree. It produced as many as 7000 spores on the underside of its leaves. These samples are well preserved in gray coal shale as many Carboniferous leaf fossils. Click on the image to examine closer the difference from the Neuropteris leaves shown on the page above. If you’ll recall the differences: in Neuropteris, the mid-vein stops midway up the leaflet and splits into several veins, whereas the mid-vein in Pecopteris extends up to the tip. Neuropteris leaflets are usually blunt tipped and are attached by a single stem as opposed by the entire base, like Pecopteris. 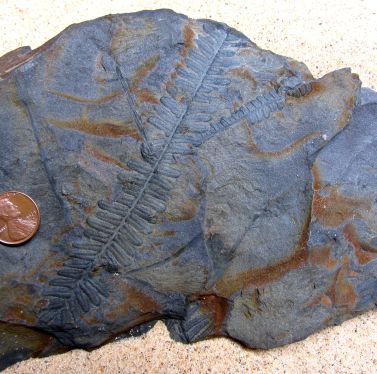 What makes Pecopteris so special? One way is in its name which was derived from the Greek word meaning, to comb. You can observe in the photo how the arrangement of its leaflets resemble that of a comb. Also, the large fronds produced on Psaronius fern tree cloaked the ancient forest floor in deep shade. The generous shade from both Psaronius and Medullosa fern tress protected the ancient creatures below from the strong ultra violet rays of the sun. Also,the shedding and decomposing of leaves created more layers of soil for roots to extend deeper and deeper alleviating the need for trees to be near water pools. Trees were then able to spread further inland. Yet another benefit was that the leaves fed inland water sources cultivating more fresh water fish varieties. But this fantastic fossil is most special to me because I inherited from my late  father-in-law, Joseph Mirto II. It was found in Johnstown, Pennsylvania.

Class: Marattiopsida (distinguished by massive roots and largest fronds of all fern trees)

This is where I share my fossil discoveries enhanced with photographs and illustrations. I also write about them at Hubpages.com along with other subjects including places of interest in my community, gardening, poetry and more. Click one of the links below to visit there.
All rights reserved © Fossillady 2011